Looks like I lost a few priority rolls when it came to Patron updates. There has been plenty going on over on the channel and those of you who are in the AoS Coach discord would be in the know.

Heaps! The last 6 months has been go go go with a heap of battletomes to preview along with the other player focused discussions… oh and getting to play the game myself 🤣. There has been plenty of great discussions with one of my highlights going to a video I did with Chris ‘Peachy’ Peach, formerly of Games Workshop now at The Painting Phase where we discuss how to bring your army to life.

It hasn’t been all battletome previews. I’ve chatted with some great event performers including some of the winners from the GW Open Finals.

I’ve been refreshing the merch line and have included some crackin’ designs including a Nurgle #blessed, Da Bad Moon, KO Barak Pew Pew, and many more. You can check out the designs at https://aos-coach.creator-spring.com/ . Patreons get 10% off (reach out if you don’t have the code) and it’s all print from demand from both the USA & Europe which should help bring down the postage costs.

Over the last few months I’ve been making some improvements on the channel which included a new top of the line mic (SHURE SM7B), the studio with it’s new brick backdrop as well as a guilty pleasure of a custom AoS Coach Mortal Realms Grand Championship title belt. I’m still got some things to do before I call this upgrade done but I’m sure you agree it’s an improvement.

What’s Happening With Me

Plenty. I’ve been getting out to a lot of single day events while the GT circuit has been light and got a few larger events done with Stormcast Eternals. It’s been an interesting experience with the army but certainly a slog in the GV & Bounty Hunter meta. I don’t I’ve seen them at their full potential yet.

I also got a chance to play in a 4 player Teams tournament under the ‘Friday Night Tryhards’ which is always a great experience. We did well placing 3rd with our battle points and victories but some harsh soft scores pulled us back to 5 of 30.

Now that is all done I get to focus on the rapidly approaching Las Vegas Open (LVO) in late January. The Stormcast are done and I’m picking Sons of Behemat back up with their new tome and King Brodd. I’m currently 3/3 with the new book and loving some of the new mechanics added like denying Inspiring Presence within 3″ and the Gatebreakers 4d6 mortal wounds on a 4+. 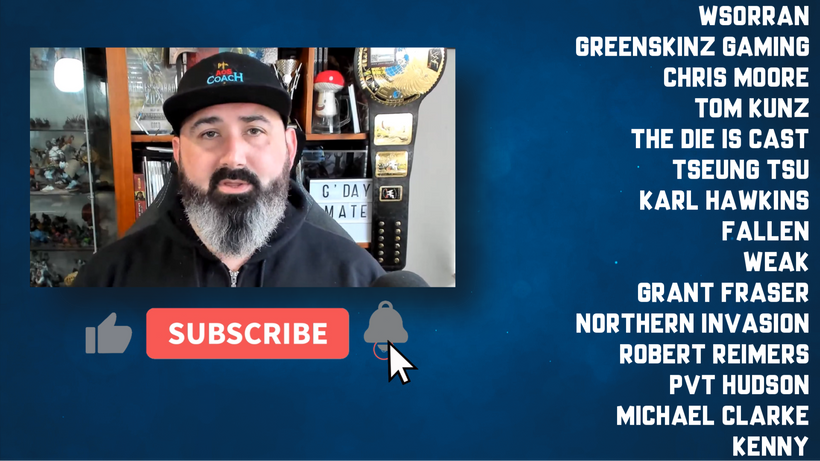 As always, Patreon & YouTube Members are featured in both the video end credits and the video descriptions while they are an active financial supporter. I know wallets have gotten a little tighter so I appreciate any support you are providing the channel as they directly fund the investments like the studio mic.